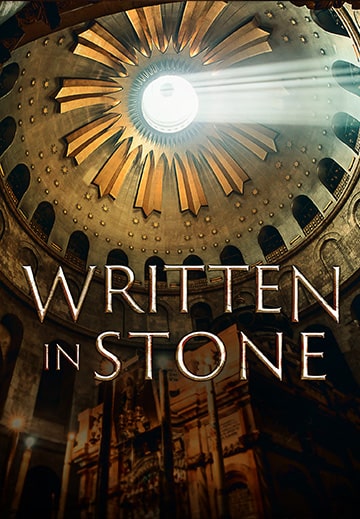 In 1867, a British engineer and archaeologist named Charles Warren arrived in Jerusalem to uncover the biblical history of the Holy Land. Since then, thousands of archaeological discoveries throughout the Middle East have confirmed the history of the Bible.

But not one artifact has ever contradicted the story of God’s Word.

The Written In Stone films take you on a visual journey through the Bible.

In Jesus of Nazareth, retrace the life of Jesus, from His birth in Bethlehem to His death and resurrection in Jerusalem. Where did Jesus live? Where did he teach? Where was he tried by Pontius Pilate? And do we know for sure where He was born… and where he died? Some of the answers may surprise you.

In House of David, we’ll follow the trail of evidence left by Israel’s greatest kings. What does archaeology reveal about writing, warfare and worship during the time of King David? Where did King Solomon build his palace, and how do we know?

In Secrets of the Temple, you’ll meet the team of archaeologists who are rediscovering the Jewish Temple of Jesus’ day. What did it look like? How did people worship? And what happened to its treasures?

In Kings and Prophets, archaeology illustrates the powerful reach of Hezekiah’s kingdom, a glimpse of Jewish life during the Babylonian exile, and the rebuilding of Jerusalem led by Nehemiah.

From excavations in Israel to the some of the world’s most famous museums, this docuseries reveals how archaeology affirms the truth of the Bible.

Watch the Written In Stone films on CBN Family: